Our first trade show was in the spring of 2015, at the Iowa State Fairgrounds.  We had invented our Munch-N-Done™ the previous fall of 2014.  It was the fall of 2014 that we shot all the video we used in our first advertisements.  This is a Missouri Foxtrotter mare, and we show the dramatic change in under saddle behavior after just one ride.  And believe me, it is dramatic.  We met a lot of wonderful people at that first trade show, and talked to a lot of folks.  Many asked if this was a behavior you could train them out of over time, and honestly, at that time, we were telling people No, that this was something you were probably going to have to use every ride, always.  We didn’t really know, and it’s always better to err on the side of caution.

And then came the height of summer, 2015.  We decided we wanted to take advantage of the nice, thick, green grass and shoot some new video.    Our old video showed too much dead brown fall grasses.  We brought out the same mare, pulled her Munch-N-Done™ off, and prepared to shoot some awesome video of her gobbling up everything she could reach, as it was so tall it was nearly brushing against her face.  And….Nothing.    We stopped, tried to get her to eat.  And…Nothing.  We tried hand feeding her grass, we tried holding her in hand, no rider, and let her eat.  We then climbed aboard,  And, you guessed it, nothing.  In the end we gave up.  I then posted something on our Face Book page about the entire experience.  And then happy customers started joining in the discussion.  They had experienced the exact same thing!   Over and over and over again.  It seems once the cycle is broken, and you have regained focus, only an occasional refresher is needed for most horses.  So not only is the Munch-N-Done a physical preventative, but an actual training aid as well!

Munch-N-Done had the pleasure of auditing a clinic put on by Terry Nowaki in Ames, Iowa on a beautiful weekend in...

Just a head's up to all of our loyal customers wondering about the name change.  Our NibbleNOT is no more, and... 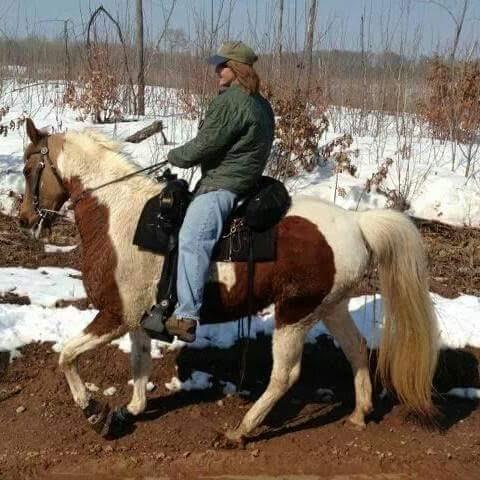 From Headshakingsyndrom.com, an explanation of what this condition consists of: All horses shake their head at one time or another horizontally,...